On Monday we caught up with Daniela Beltrani, curator of the exhibition aSita. Featuring the works of Alison Wilson, Dominic Fondé, Cyan Ong, Homa Shojaie, Marc Nair, Syv Bruzeau and Yeo Shih Yun, aSita is an exhibition that delves on the theme of whiteness and blackness. The word “sita” is a Sanskrit for the colour white. By adding the privative alpha prefix, “aSita” is hence both whiteness and its negation at some level.

At first glance, visitors might think the exhibition dull in hues of black and white. However, in its subtlety and stillness the works speak of sensitivity to a greater potentiality; a lot more is said though at first your eyes do not see it. 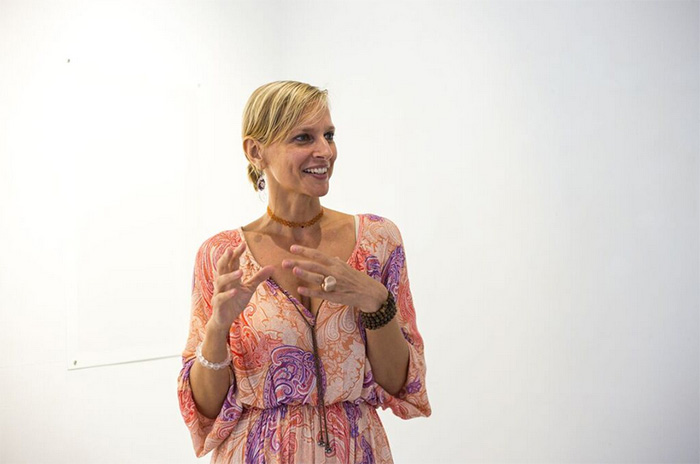 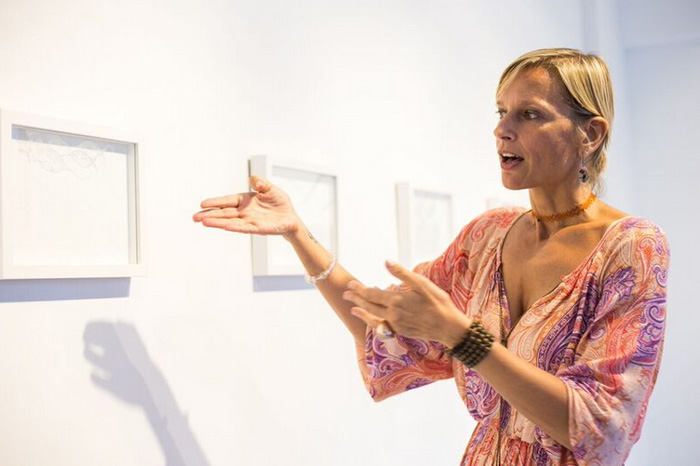 The exhibition catalogue mentioned that “aSita” was two years in the making! Could you expound more on your creative practice as a curator, and how this theme came about?

All these works are monochromatic. Black is not a colour, white is of course all colours. What I like is blackness on whiteness. Sometimes you observe a certain physicality in the things you see, and you can read further into them. So it’s almost extracting from the life experience, blowing it up and exploring. White is like a sheet of paper, and we use the black pencil. As we hover on top of the paper, it is as if putting everything we have within us into something. So the idea of whiteness as potentiality came to me. As a child I thought that the older I am and the more options I have, the better I can live life. But I realized it is when you make decisions; you take the pencil and actualize experiences. Already Aristotle was talking about potentiality and actuality—another duality. So I invited the artists to create works with blackness, which is meaningful, onto the whiteness where anything can happen.

What do you enjoy about being a curator?

I love this sense of community spirit in supporting however you can, contributing to Singapore’s art scene. For example, Homa helped to install Shih Yun’s work; so this idea of community and bringing people together in irrespective positions of life is something I love.

Also, apart from Syz and Homa’s works, everything else is specifically created for this exhibition. Another aspect of curating I really enjoy is the dialogue between the curator and artist, where the curator knows what kind of art and inspirations that artists have, and together they explore new territories. 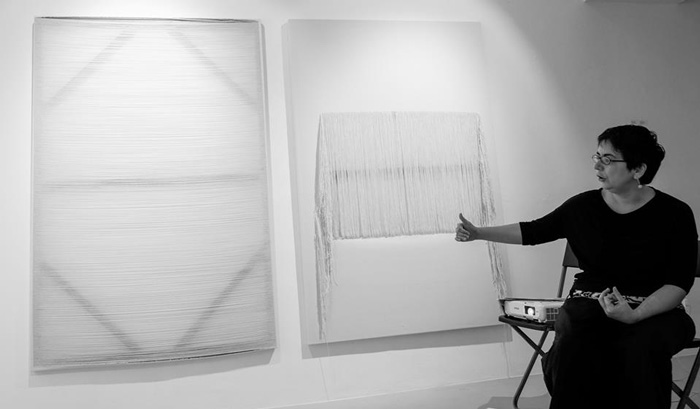 The artist Homa Shojaie at the artist talk on Monday. Photo © Marc Nair.

Which aspect of Homa Shojaie’s work intrigued you?

What struck me was how she was interested to explore the material. As opposed to paint, where you apply something, she was taking something away. This, however, still remains in the realm of painting. And she has also named these two other works “Landscape” and “Portrait” while at the same time referencing the masculinity/femininity, the warp and weft. As a performance artist myself, it is not about imposing but discovering what the material can convey. In this materialistic world we tend to forget that the object is the carrier of the experience. It is about how we react, our layers of interpretation. At the end of the day, for me, it is on the epidermis—a body experience that touches you inside. 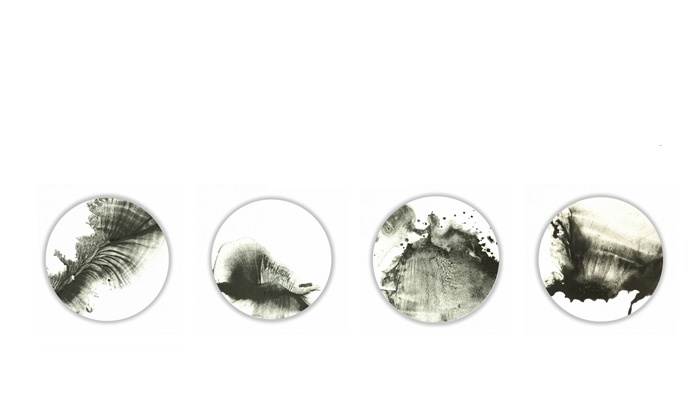 What other themes are brought across in Shih Yun’s work?

As opposed to being the artist alone, she collaborates with the material and lets it speak. She used old speakers, and placed a membrane over it. So she drops graphite and water with a huge dropper on the membrane. And as the song “We are Singapore” plays, everything jumps up and blends together. Then she places a paper over to capture these ejections—varying the distance. Almost facilitating the process, she has no control over how the ejections flow and happen. So the idea of collaboration, and of the artist keeping a distance to let the work speak for itself. The artist welds control, and at the same a lack of one. These works also have a specific title and come from the song “We are Singapore”—“Life”, “Lion Roar”, “Peace”, “Stand Together” and “Future”.

Cyan Ong’s Wall is both an examination of spaces and relationships.

Yes, and even more so. The idea of hybridity—these spaces that are also abstract lines—the particular and the general all in one image. Also, as a wall it is plain white space, but once you add other walls, interactions such as shadows are formed. In a way it is knowing the Self through the Other.

Though Syv will be performing Butoh (a type of dance), what we see here is an installation.

This is an installation but it is not created per se, and will be finalised through the performance on Friday. This video is an excerpt from her performance, where she breaks down the idea of walking—to movement and stillness. 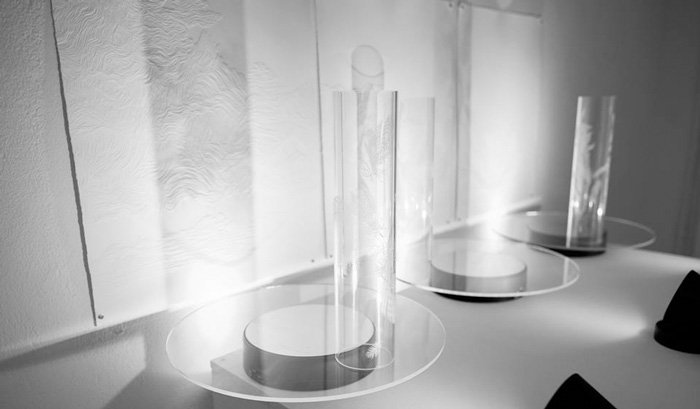 This collaboration is interesting, Alison is a printmaker while Dominic is a glass artist.

Yes, Alison brought in Dominic to collaborate and the result is wonderful. The theme is again shadow-blackness, grey on whiteness—but they’ve given it a different interpretation.

Similar to the other works, the idea of pushing the medium is again explored here.

Dominic engraved on the glass, which is part of the frame. So he has expanded the artwork to include its frame. The beauty in the physical engraving, is also complemented by light which casts a stronger shadow. So the artwork includes both the frame and light—external sources.

What about in printmaking?

Allison has used blind embossing. And in her workshop just conducted today, participants used mundane materials to create landscapes. You either add or remove things, again pushing the conventional notion of printmaking as it’s not just about the prints, but the many methods in the process.

How did they arrive at this ingenious idea of using a turntable? (A glass tube engraved by Dominic sits on a turntable, the shadow cast moves across Allison’s print)

A stationery glass would mean difficulty in showing both the details of the etching and the sharpness of the shadow. They decided to use turntables, so you both look at the tube or the reflection, and also get a sense of dynamism. In Migration, there is the trace of the of the birds’ presence brought through the feathers, and the movement gives you this wonderful idea of the birds flying and their feathers floating in the air. 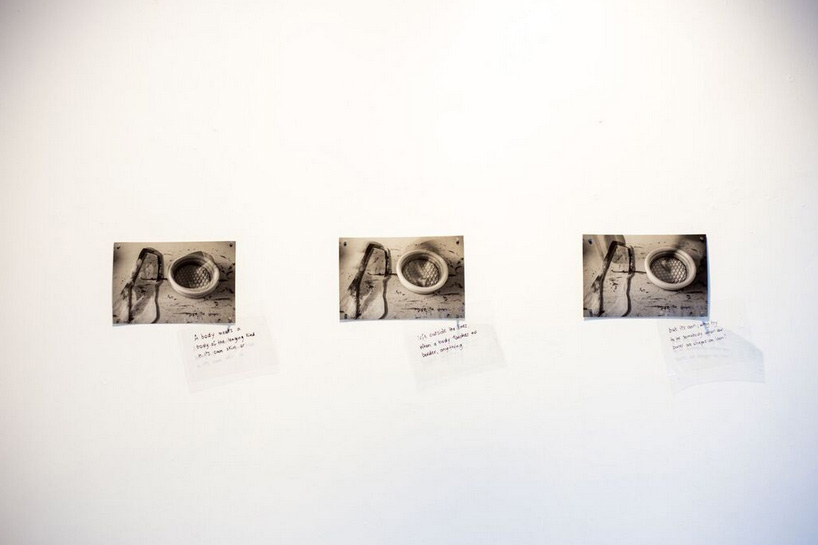 There is a certain rawness to Marc’s Container.

Yes, we didn’t want to frame the photos as it would be too rigid, we wanted more movement. Both the cut-outs and the pool contain her shape as container of sorts. But the photo’s paper and the floor can also be seen as containers. Most of the time we take what is inside as what is contained, but you can actually flip it around and look at it as emptiness. Emptiness and fullness is again another duality which you can explore. And as for the words, the idea of encapsulating something is caught in this idea of the laminator. The poem is fixed, contained, and the only thing you can do is cut it, you cannot remove the words.