“There are some [artists] who benefit greatly from patronage…A thriving art scene has its patrons,” artist Yanyun Chen tells me. “They open new doors for emerging artists, like myself and my peers, and Singapore has been missing programmes like UNTAPPED.”

We’re standing in SHOPHOUSE 5, the visual arts space owned by Angeline Chan and Nick Davies, two of the co-owners of Chan Hampe Galleries. Together with their business partner, Ben Hampe, the trio established the Visual Arts Development Association (VADA), which aims to build a network that connects artists with patrons. Patrons can select works from any of the exhibitions that they show - the artist list derived from an open call and selected by industry experts. In that sense, VADA is a welcome addition to the visual arts ecosystem in Singapore: patronage has always been an essential rafter that supports the artist on his or her artistic journey. The financial support that comes from people buying works of art, as well as the opportunities that these networks of patrons can give to emerging artists, is not something that many institutions or organisations often attempt to tackle head on. Indeed, the importance of patronage has been little acknowledged in many of the efforts to build Singapore into a cultural capital; yet, if Singapore is to see an independent, thriving, and vibrant arts scene, patronage has its part to play.

So it was refreshing—and altogether encouraging—to see red stickers appear on the accompanying labels of the works over the course of the two and a half hours that I was in the gallery. If this opening night is anything to go by, VADA is well on its way to establishing itself as a firm contributor to the art scene. With the help of an advisory committee, the not-for-profit group has much to be proud of for its latest UNTAPPED EMERGING exhibition that it put together—for the mere fact that it had achieved what it had set out to do. 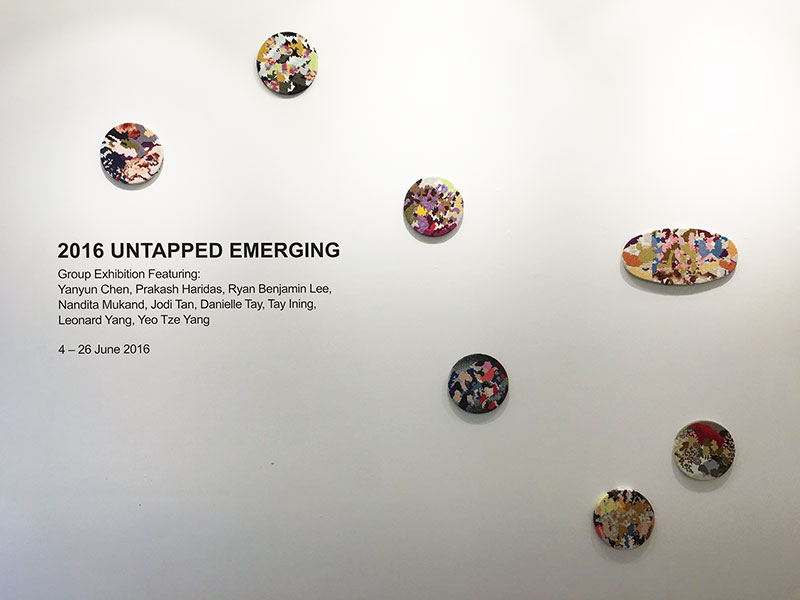 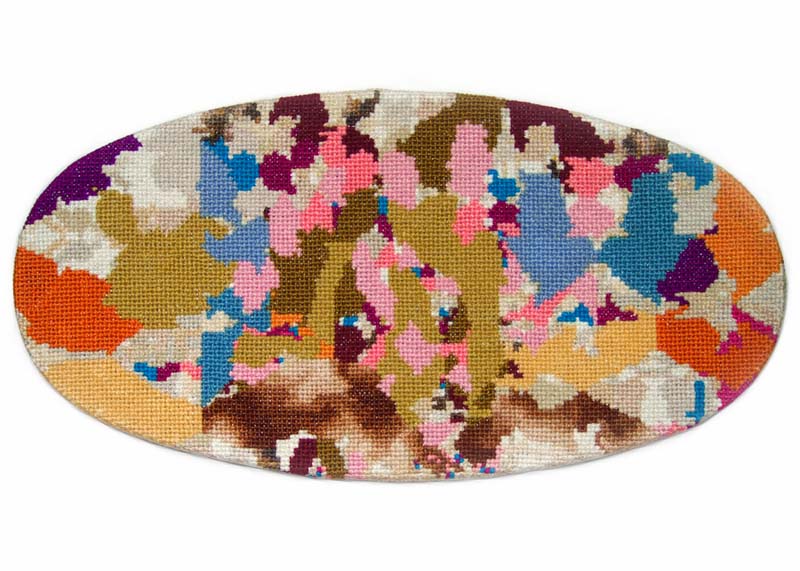 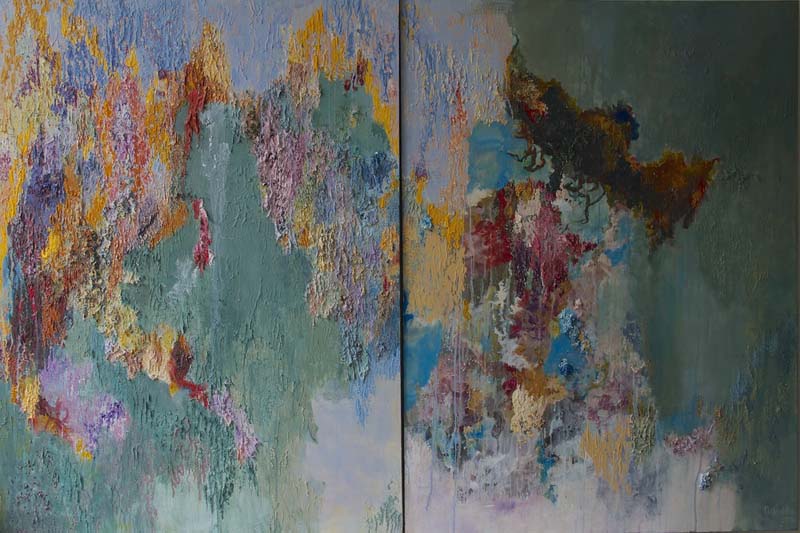 Yet, one cannot mistake the UNTAPPED EMERGING exhibition as a merely commercial exhibition. VADA is no Affordable Art Fair; the set-up of the exhibition reaches standards of professionalism when it comes to displaying the artworks, with each work being given its own space to breathe. This appears to be an exhibition that pays as much attention to the artists’ artistic intent as much as it does to the dollars and cents. Together, the exhibition presented a good crop of young artists; each of whom had much to say about their works and their own reasons for making them. Ultimately, it was an eclectic mix of styles, practices, and visual languages that lent the exhibition an air of playfulness.

This notion of playfulness was, perhaps, brought out by the two sets of colourful works that framed the entrance to the gallery. Jodi Tan’s work flanked the left, while Nandita Mukand’s oil and varnish works flanked the right. Form and colour are experimented with here, with the colours sprawling, even almost dripping, across their chosen mediums. That is, however, not to say that each work does not achieve a certain kind of poetry, a balance that showcases the artists’ awareness of arrangement and composition. 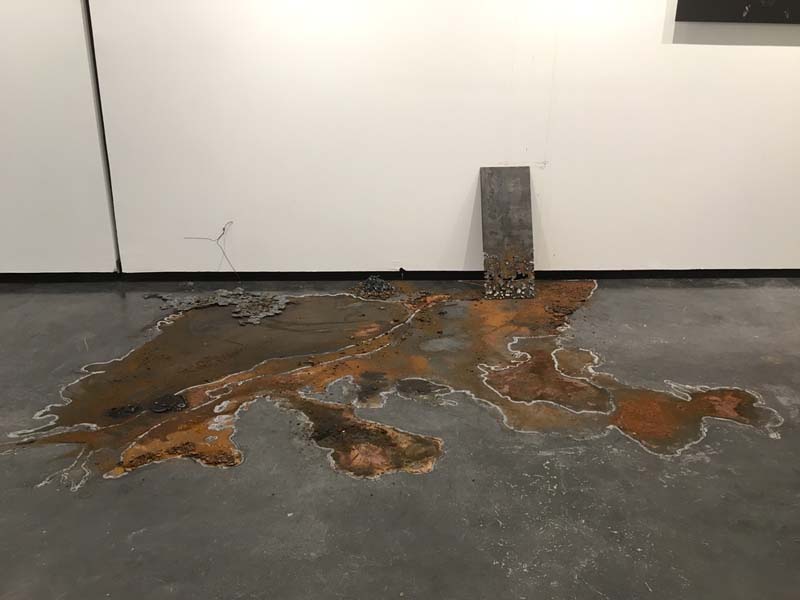 Against Wall Viewing The,Tay Ining (2016) Mild Steel Installation, Set of 3, 65 x 40 cm (each). Photo from VADA's website and courtesy of the artist. 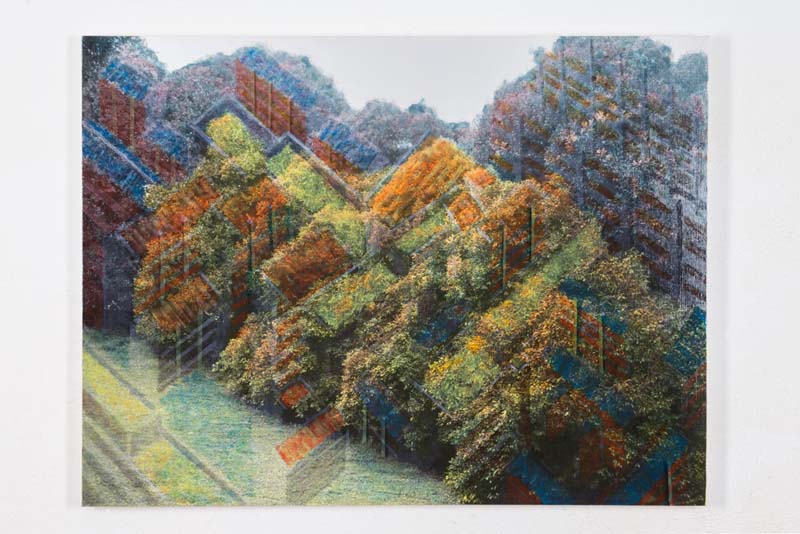 Tay Ining’s was an interesting work that saw the artist staining the floor of the gallery with the rubbings of mild steel. Mild steel—broken, chipped, even reduced to dust—were formed, creating an installation that explored the possibilities of what mild steel (a little used medium!) could do. Perhaps it is no surprise that Tay has a day job as a metal fabricator—she runs her family’s metalworks company. For Tay, work simultaneously becomes play. Beside Tay’s work stands Prakash Haridas’s Autogenic Series I, II, and III—geometric prints which dialogue with Tay’s installation.

Leonard Yang’s Castle series is a surprising take on the architecture of the common HDB block: trained in photography, he took pictures of the ubiquitous structures until he found himself realising the potential of flats to look like the towers of castles, imposing down on us against the backdrop of the sky. His dreamlike works were created from the process of painting the architectural structures of HDB blocks onto photographs of foliage. The result is one that makes one imagine a kind of ephemeral castle in an enchanted glade, almost a la the castle of the fabled Sleeping Beauty. 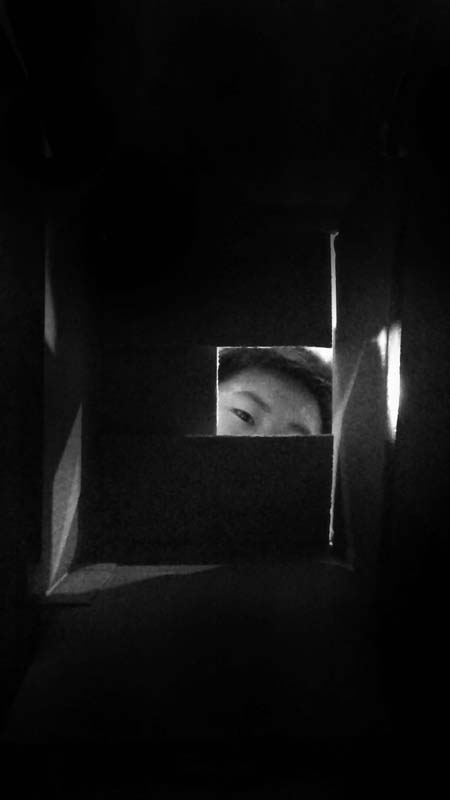 Between The Cracks In The Sky, Ryan Benjamin Lee (2016). Video Installation, Dimensions Variable. Photo from VADA's website and courtesy of the artist. 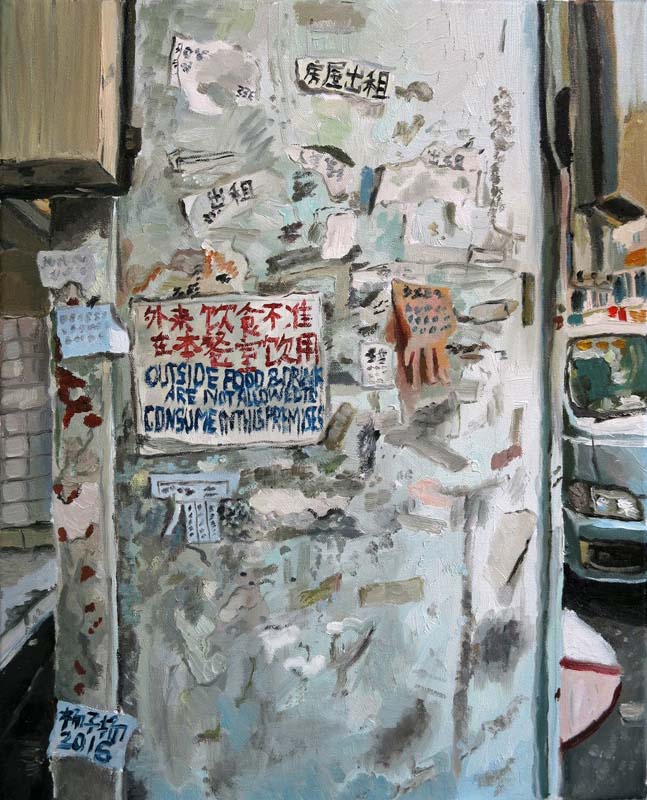 And from the imagination of Yang, one is pulled into a topsy-turvy world by Ryan Lee and his video installations. A site-specific installation, Lee’s projections of unknown silhouettes stare down on us, making us feel watched and wary. Adjoining that is a hollow plinth that one can peer into through an eyehole—into another video installation work showing people walking “below”. It is a fascinating study of perception, one almost perfect for the space it was created for. Next to his work are Danielle Tay’s Oasis II and III, mixed media works that evoke the wild, sparkling beauty of Mother Nature.

The show ends on a more serious note with Yeo Tze Yang’s oil renditions of Geylang scenes; a self-taught artist, Yeo’s depicts Geylang as he sees them, bringing his vision to his audience in a (somewhat paradoxically) careful flurry of brushstrokes applied to the canvas. They are arresting works, vibrant in colour—in contrast to Yanyun Chen’s no less beautiful black-and-white charcoal sketches of flowers. Chen’s charcoal works are careful, detailed, and painstakingly produced, but that is not to say there is no element of play involved: as we know from our previous review of her solo exhibition, Chen plays instead with time, light, and atmosphere.

Clearly, it is an exhibition that appeals to serious collectors—but it also appeals to anyone with an interest in seeing what ideas, practices, and visual languages that contemporary artists are chasing. Perhaps that is where UNTAPPED EMERGING gets it right: this isn’t a show that boxes itself into a corner; rather, it remained approachable, accessible, and still responsible to the emerging artist—and for that, it is hoped that VADA is here to stay.

Don't miss out on Singapore's art scene! Now available for Vietnam too: 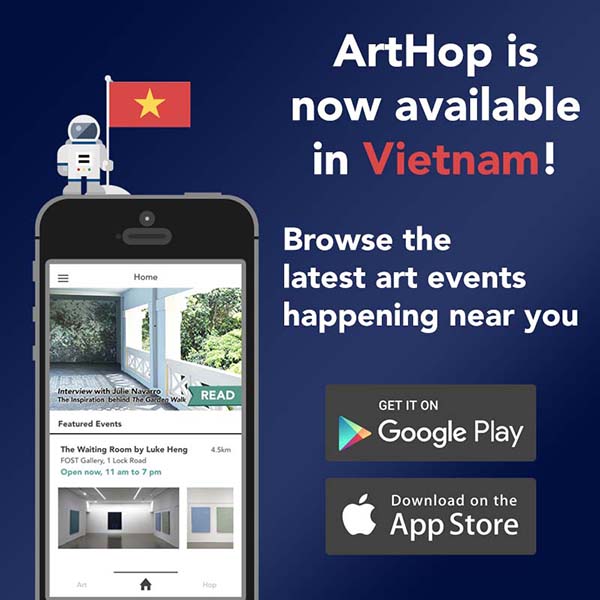