If Walter Benjamin’s constellatory dialectical approach in the Arcades Project were to manifest spatially, perhaps it would be within that of the Institute of Contemporary Arts Singapore’s exhibition, Lost and found: imagining new worlds.

In the open, wide, reflective expanse of the ICA Singapore’s Gallery 1, one stands suspended in an almost matrix-like space where time and histories crisscrossed in stunning, brilliant constellations of relations and meanings through a collection of text, sound and images.

Lost and found is guest curator Raphael Fonseca’s project as part of his ongoing research as a curator, critic and art historian that explores the impact that plural histories have on contemporary art.

The exhibition is based on Fonseca’s deliberations and reflections on the collection as a repository through which historical accounts, imaginative narratives and classification processes are made sense of, expressed and used. Considering this idea in the Singapore context has also led to the decision of drawing from the LASALLE College Collection and exploring how artists have consequently stretched or interpreted this invitation. This led to the selection of 10 artists whose practices and presented works explore acts of collecting, classifying, organising and display.

The result is an exhibition of works spanning disciplines and media that go beyond the arrangement and display of static art, artefacts or texts, to present and investigate the processes behind the idea of collections.

The ICA Singapore’s gallery space has once against played a pivotal role in the presentation of a show—the glass walls and reflective floor surfaces have always rendered another fascinating layer of meaning and materiality to an exhibition of contemporary works.

This show in particular, addresses the issue of transparency in the presentation as well as management of collections through the physical transparency of the space. Each visitor engagement is laid bare and visible, yet there is also a perceivable division between this space and the outside world—the exhibition is both a part of, and separated from, the “outside world”. In the gallery, time seems to stand still, or more accurately, exist in a state of timelessness, activated once again only when a visitor enters, bringing in the lens of their own contexts, perspectives and views.

Entering the space, what appears like a random collection of sculpture, furniture, tools and materials in the far left corner of the gallery immediately captures the viewer’s attention. Upon closer inspection, the items are carefully—even lovingly—arranged in a sort of indecipherable order. In New world (2019), Ismael Monticelli used small to medium-sized sculptures by founder of LASALLE College of the Arts Brother Joseph McNally, his sculpting tools, as well as disused furniture found on campus to create this complex, multilayered monument to the founder. While some items are placed higher than others, it does not conform to a visual hierarchy—I never got the sense that any sculpture, tool or furniture was more valued than others. Rather, I felt that it was the opposite. The deliberate arrangement was an invitation to look closely and slow one’s pace, in order to observe each item and its position. I could have spent hours just looking at the structure from different angles, craning my neck to ensure that I saw every nook and corner of the work.

Not to be forgotten is the backdrop of poster boards on the walls that are also part of the work. Monticelli’s poster boards are placed on striped colour-blocked walls in shades of grey, white and black, featuring quotes from Aldous Huxley’s Brave new world (1931) with a design reminiscent of the Singapore National Productivity Board advertising of the 1980s. Stepping back after studying the various posters and objects of New world, the work began to resemble an image of Poh Tien Keong—a temple in Toa Payoh that was later demolished in 1977—the wall replicating the look of block 33 behind the lost temple, with the posters for windows. The colourful arranged monument of objects and furniture stood in sharp contrast to the orderly walls, rewarding careful looking with uncovered meanings. The viewer is given every opportunity to interpret and discover histories for themselves, whether as a portrait of Brother Joseph McNally through remnants of his tools and sculptures, a narrative of a persistent yearning of progress of Singapore and of McNally, or something else entirely. Mesmerised by McNally’s sculptures as I circled Monticelli’s structure, Monticelli’s monument appeared as if it were moving, fluid, ever-changing, just as the outcomes of our engagement with the work. 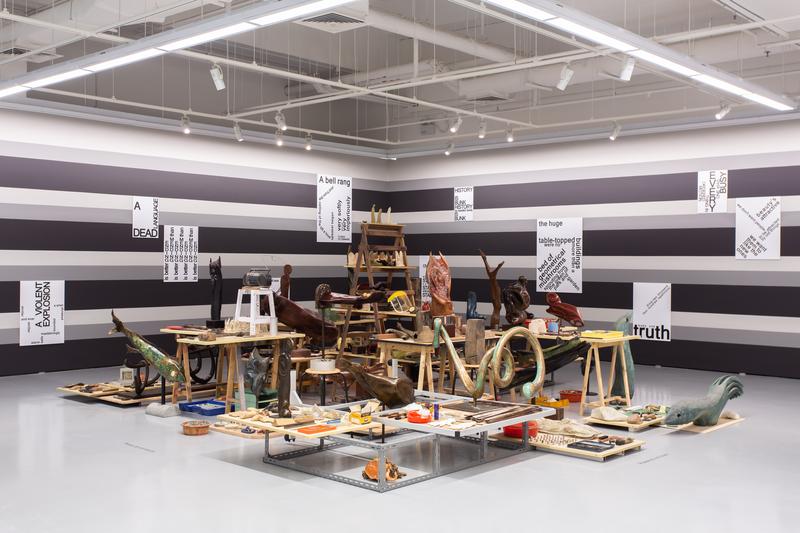 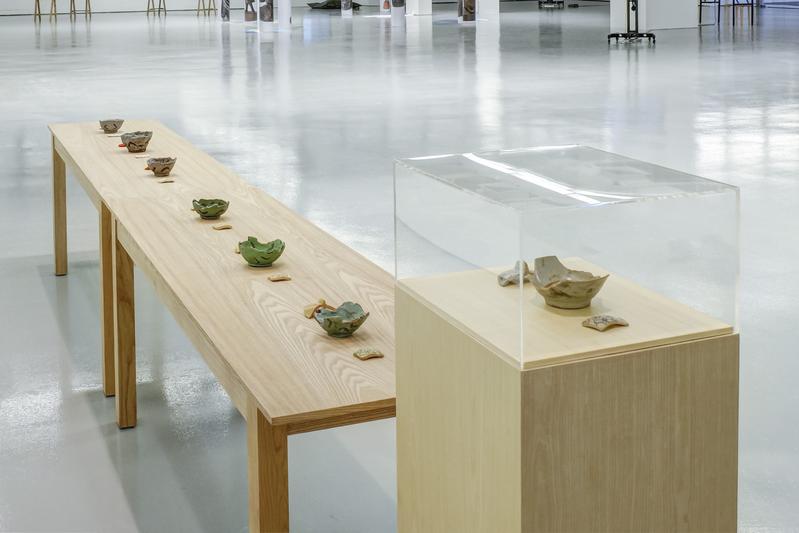 The next work, Pamela Cevallos’ The whispers (2019), made collaboratively with six BA(Hons) Fine Arts students at LASALLE seemed to have drawn its name from the concept of the popular game Chinese whispers, where the original message is gradually distorted by being passed down from one person to another in a whisper. Three pieces of a broken earthenware bowl of unknown provenance held in the LASALLE College of the Arts Collection sit in a clear case atop a pedestal. Next to it on one long narrow table are 18 replicas (six sets of three fragments) of the earthenware bowl, made by the Fine Arts students.

Cevallos first invited three students each to replicate one of the ceramic pieces. Next, she got the same students to replicate each other’s replicas. The reproduction process was repeated a third time before a second trio of students undertook the same steps, beginning with the first group’s three final-round replicas. The final products are presented on the tables, revealing both process and result.

Studying the various earthenware bowls, I was both intrigued and amused at the changes that transpired from replica to replica. Would it have made a difference if the original earthenware bowl pieces were not present? Would it have made a difference if the original was not placed on a pedestal and distinguished from the rest? Could the “original” broken earthenware bowl even be defined as an original when its origin has yet to be confirmed? Was each interpretation of the bowl fragments considered less than the original? Were they not each original in their own way? I was left with more questions rather than answers, yet I deeply appreciated the nuances on notions of originality and the dissemination of cultural material evoked through this collaborative work. I eventually walked away with the belief that the “original” did matter, that even if each replica was original in its own way, the circumstances of its production made all the difference. The variations in the eventual replicas also brought to light the idea that there can be diverse understandings, interpretations and reception of material, communicated and presented in equally varied ways.

Meandering through the rest of the exhibition, Raquel Stolf’s Dream and reality (2019) stood as a constant encounter. A project that she started in 2011, Dream and reality consists of news headlines describing the behaviour of animals that Stolf had collected over the years. Presented as part of Lost and found in a variety of media, the vinyl text adhered to the gallery walls and floor dictated a choreography of the viewer’s movement across the space. Literally stumbling across them beneath my feet and having them hover over my head on the walls, the texts persistently circled me, presenting new instances and sites for encounters with these headlines and new meaning for both the text and other works in the same space. The text that ascribe aspects of human behaviour and social organisation to the experience of animals is given an additional anthropomorphic element as a physical text that surprises and circles the viewer within the gallery space, conjuring vivid images with its absurd content that is impossible to ignore. 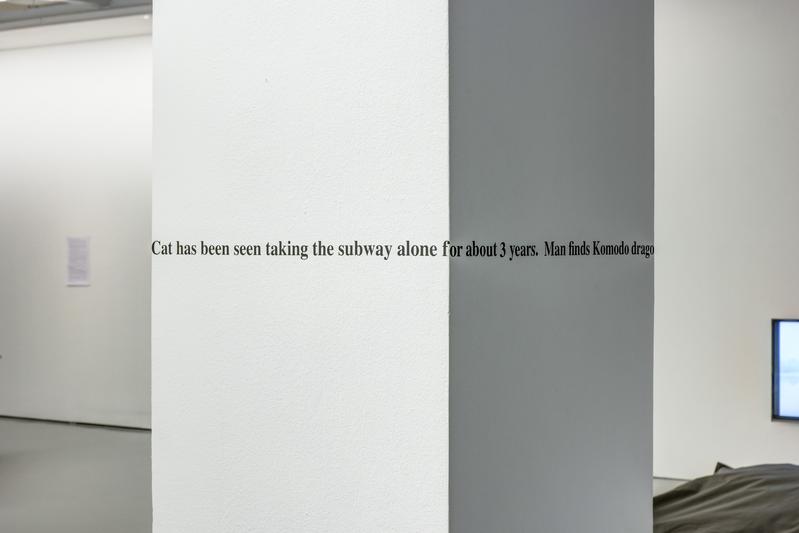 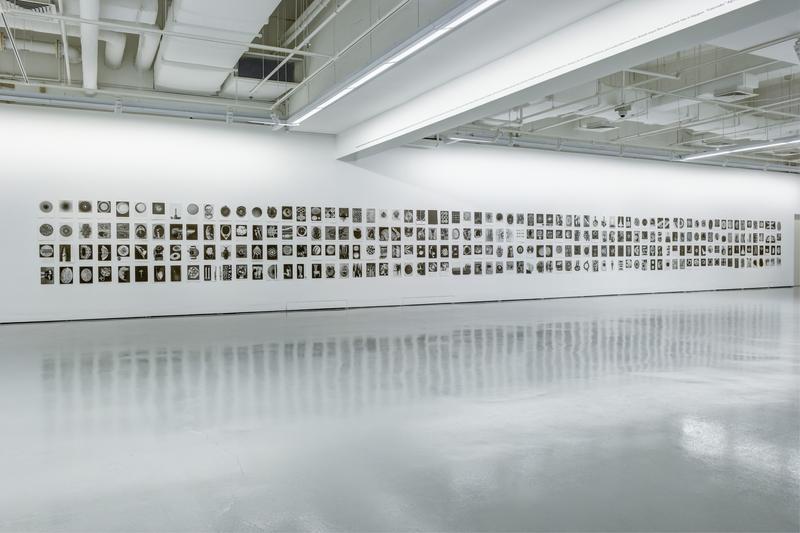 Also impossible to ignore is Batia Suter’s Radial grammar unfold (2018-19). Suter’s book, Radial grammar, published by Roma Publications in 2018 and exhibited for the Le Bal exhibition space in Paris, had been taken apart and presented in an installation format against a wall of the gallery space. The book features black-and-white images, and two books had been taken apart to create a grid of 272 images (images are printed on both sides of each leaf, hence two books were required to display every image).

As I surveyed the expanse of black-and-white images, Walter Benjamin’s Arcades Project once again surfaced in my mind. The Arcades Project was the brainchild of German philosopher Walter Benjamin—a massive and ambitious undertaking that sought to understand the modern industrial world by examining the nineteenth-century arcades of Paris. The project involved a large collection of text and images, spanning topics such as advertising, fashion, prostitution and progress. It was never completed but stands as a compelling fragmentary work that invites readers to contemplate and draw connections across entries. Much like the Arcades Project, I was invited to create my own correlations and relationships between images across the collection, in ways that I saw possible and draw meaning from these connections. Unlike viewing the images in a book where the format already presents a certain ordering, this unfolded display gives the viewer free reign, a “collection of perceptions of everything in the world outside our own borders”.

I took a moment, before I left, to stand in the centre of the gallery space, taking in every work that I could see, the various media, colours, sounds and textures. And it was in that moment, in the open, wide, reflective expanse of the ICA Singapore’s Gallery 1, I found myself suspended in an almost matrix-like space where time and histories crisscrossed around me in stunning, brilliant constellations of relations and meanings through a collection of text, sound and images—a brilliant, cohesive investigation and exploration into archives, collections and our own place in the meanings that they present us.

Lost and found: imagining new worlds was installed at the Institute of Contemporary Arts Singapore, LASALLE College of the Arts, from Feb 2, 2019 to Apr 10, 2019.