You go to an art exhibition at Yavuz Gallery Singapore. You look around at the art installation with the appropriate art gallery decorum (from a distance without touching anything) and then leave. If so, not only are you short-changed, but the exhibition itself is devalued. With socially-engaged artworks like Nge Lay’s Flying the Fragmentary (23 June - 15 July 2018), audience engagement is a prerequisite. 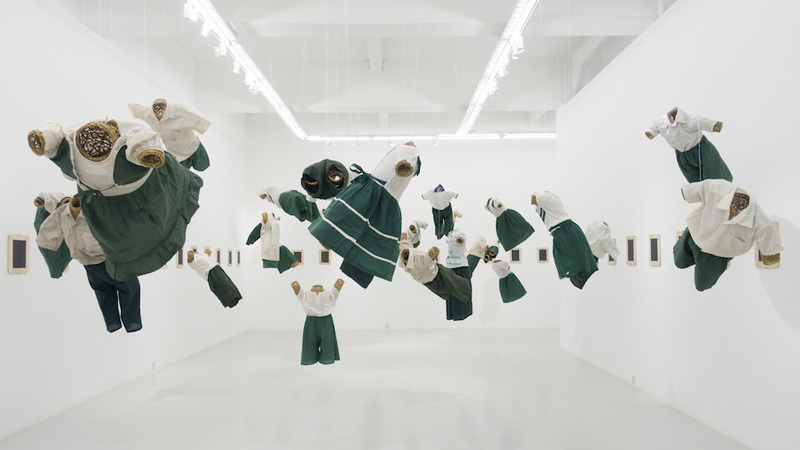 In the middle of the white space were 30 child-size rattan mannequins suspended around eye level, very close to touch if one stood in the middle of the installation. The mannequins were dressed in used primary school students’ uniforms, each swaying calmly like a child would shuffle on his or her feet. The walls of the gallery were lined with 50 black chalkboards; some had writings on it while others were left empty. Walking around the installation, there was another pair of pre-owned school uniforms, a boy's and a girl’s, on an archival display. Next to it was a video of young children talking about their aspirations as they stood in the middle of a humble classroom. Lastly, in the gallery stood a metal cage of small school backpacks and tattered books. 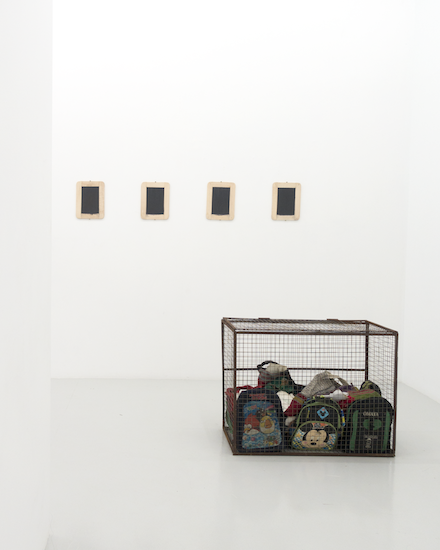 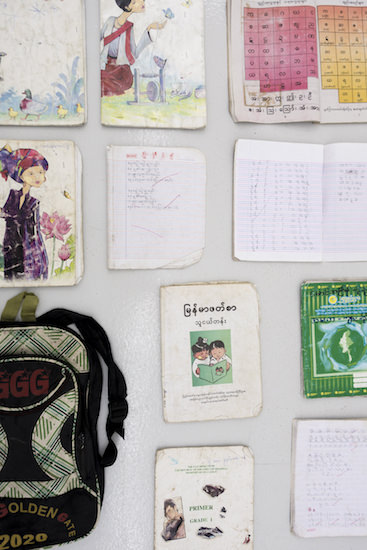 Nge Lay (b. 1979, Myanmar) has been advocating for education in Myanmar that allows more flexibility and is open to questions. Her projects about education have been ongoing. In Flying the Fragmentary, the use of rattan captured a number of interweaving ideas. On one hand, the artist alluded to rattan canes used to discipline mischievous kids. Archaic academic systems that limit and misdirect were betokened by a rusty metal cage that held disenfranchised school bags and outdated books. Myanmar has gone through multiple education reforms since the military took over in the 1960s, with the most recent reforms two years ago. However, despite the reforms, same frustrations are carried over to this day—the lack of education policies and systems.

However, this exhibition was not all gloom. On the other hand, Flying the Fragmentary suggested hope for the next generation. There is common belief that education is a sure escape from poverty, a leap towards an ideal standard of living. Children in a video shown on a television screen spoke of the same aspirations. Their ideas of hope were objectified by the rattan mannequins, which were seemingly unrestricted in their buoyancy. Rattan is an accessible material that can be used as a structure to create a spectrum of things: from a toy to a house. Similarly, education can be a tool for the children to build their future. 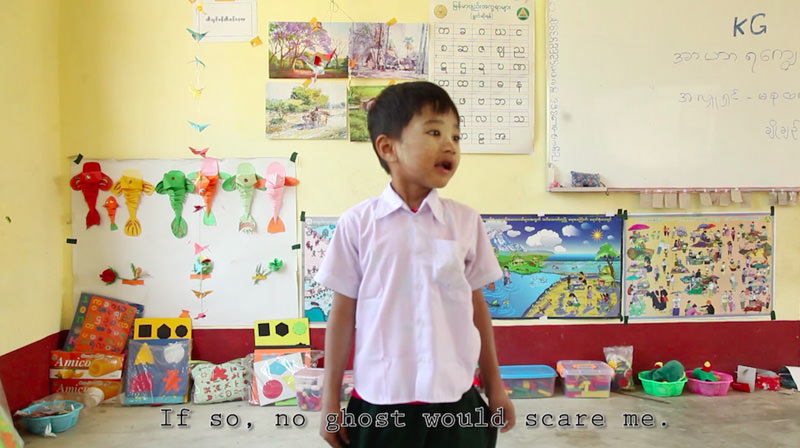 Still frame of video in Flying in the Fragmentary. Courtesy of the artist and Yavuz Gallery.

These art objects were a part of the exhibition but not its whole. The social engagement in this project was another critical material. Nge Lay involved the Thuye’dan village community in Myanmar as co-creators of the installation. The village is a remote area ten hours north of Yangon and most villagers were not familiar with the idea of art in their rural setting as it was not taught in schools. Nge Lay has good intentions in changing that. School children, along with village craftsmen, shaped the materials that they themselves contributed for this show. The children also included their own uniforms, bags, and books as materials for the installation. The show had poetic visuals, but the artworks would be discounted if viewers passively looked without engaging the community who authored them. The artist considered that the artworks were not made only by her but by members of the Thuye’dan community as well, of which her family is a part of.

Furthermore, participation was asked from the gallery visitors in Singapore. They were invited to be an active audience by writing on the chalkboards. This interaction cut the distance between the visitors at Yavuz Gallery and the community at Thuye’dan village. It forced one to see the gap between the materials of this exhibition that were taken out of its local context from the village and into the Gillman Barracks gallery. Such gaps would not be easily seen if one views the work from a passive and distanced position. A more dynamic viewership was required by Flying the Fragmentary’s community-engaged approach. 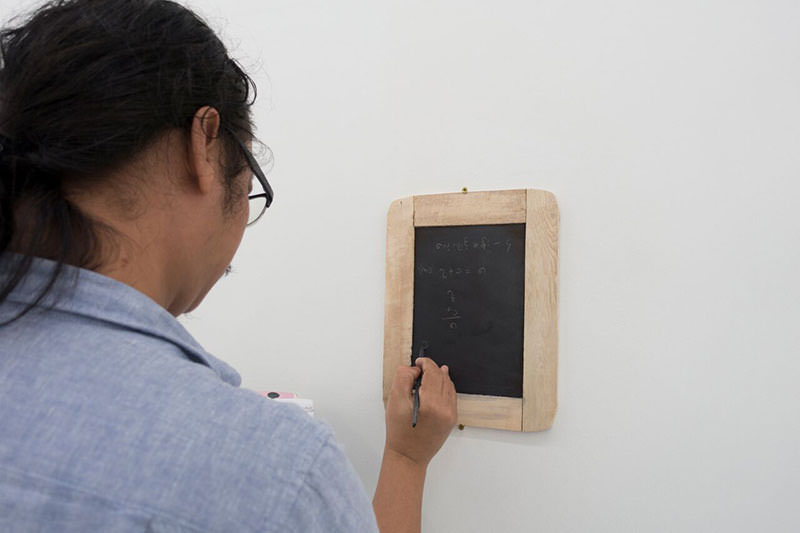 The perception of lightness seen in the rattan mannequins caught on to the gallery visitors. Throughout the duration of the exhibition, the chalkboards were filled gradually with eager statements about the children’s future. Socially-engaged art is a favoured vehicle to promote conducive sentiments through community building. Such art initiatives often look for societal problems commonly disregarded by the government and endeavour to iron them out. At times, misalignments might occur when such community projects are transplanted to an institution where it is displayed as art. However, Flying the Fragmentary’s insistence on the gallery audience’s participation in the villagers’ work attempted to stitch that divide. In addition, the artist often presents the documentation of her artworks back in Myanmar so her co-creators could see the outcome. The installation’s immersive approach extends fragmented sentiments from the villagers to the gallery viewers and vice versa, adding multiple layers of social relation to the artwork.

Flying the Fragmentary was staged at Yavuz Gallery Singapore from 23 June to 15 July 2018. Click here for more information.