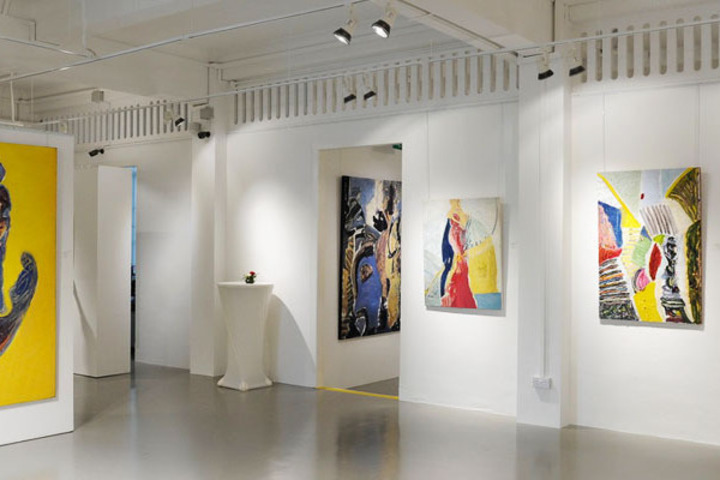 Art Trove is a private museum specializing in European art from the 19th and 20th centuries. The 2,400 sq ft gallery is located within the premises of the former Catholic High School building in the heart of the Bras Basah-Bugis Precinct, adjacent to the Singapore Art Museum. Founded in 2010 by Nicolai von Uexkull, a German national, and Singaporean partner Roy Quek, Art Trove aims to restore neglected and rediscovered artists to their rightful places in the art scene. Respecting the principle that works of historical significance must be preserved as a whole wherever possible, Art Trove assembles core collections of our artists' most significant works and commissions research relating to their lives and oeuvre. One of Art Trove's resident artists is Strawalde Jurgen Bottcher (b. 1931), an artist who was held in the same regard as esteemed painters such as Braque, Feininger and Jawlensky. Despite the heavy censorship of his works by the East German state, Strawalde exhibited tenacity and fortitude in the face of adversity, quietly pursuing his passion in the arts until censorship restrictions were lifted after the German Reunification. Since Strawalde's re-emergence as a painter after 1991, he has been committed to his craft and employs a spectrum of techniques to add depth to his paintings. In recognition of Strawalde's dedication to the arts, Germany and France have awarded him the Federal Cross of Merit and Knight of Arts and Literature respectively, two prestigious accolades that are conferred only to a select few. Art Trove's permanent Strawalde exhibition displays the artist's large and colourful abstract canvases which are steeped in meaning and thought-provoking. Other than Strawalde, Art Trove features an eclectic range of artwork from numerous resident artists, including Ewald Platte (1894-1985), Trish Wylie (b. 1950s) and Adrian Gray (b. 1961). In addition, Art Trove has also embarked on several exhibitions such the British Royal Show and Pablo Picasso and the School of Paris, showcases that featured celebrated artists in the likes of Picasso, Dali, Chagall and many more. Art Trove is currently preparing further significant exhibitions, and in doing so, is committed to promoting artists whose works deserve due recognition for their contribution to European fine art.